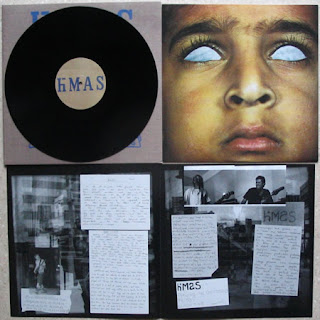 Finishing off the week with not one but TWO Hobart-related posts, because. Homeless Records have not steered me wrong once, so when Richie sent me through the archival material of lost Tassies hMAS, as if I wasn’t going to dive headlong into the murky waters without testing the depths. Sure, Fear God Honour The King has enough aural debris, sonic outcroppings and shaggy rock to knock someone out, but these are the types of waters I regularly bathe in. Recorded in 1997 (!) and remixed by lazy sonuvabitch Mikey Young (and mastered by Ben Crothers), this bears much resemblance to the kind of fuzz-damaged literate silliness that Sonic Masala band Tape/Off spew out at irregular angles (‘Fungus’ sounds like the broken bridge between EP and album for the Brisbane slackdog millionaires), and is the unassuming cesspit that geographical brethren Treehouse sprouted from. Richie’s phrasing of hMAS as ‘pointless yet essential’ is a great way of describing the bent and blasted guitar rock here, as concerned with smashing things in some form of identifiable tempo and melody as they are at being noisily indecipherable – it’s the kind of cacophonous mess that is also bristling with hooks, tone deaf yet glistening with naïve-pop noise. The backwards oscillating loop that sounds like an stoner experiment takes up the first half of the appropriately titled ‘Absurd’ (the second half is a demo-esque punk blast of questionable quality, but what good punk isn’t?); the pig-fuck scrawl that permeates the pub-punk sweat-flecked ‘Bucket Boy’; the Devo-meets-addled-Jim-Carroll-with-added-space-wah ‘Friend Is Dead’ – it is all a bunch of friends fucking about. Maybe it wasn’t meant to be heard. Thank the Lord for Homeless that hMAS now has a home.

You can grab Fear God Honour The King here - be quick though because there are only 3 left! If you are lucky you can get versions of the other two releases – The Computer Tape, a experiment (hMAS to a tee) of their songs reconditioned to a Commodore Amiga 500, vocal melodies and all. A Kraftwerk-meets-Devo reimagined score of an Atari 8-bit version of Mad Max III: Beyond Thunderdome. Weird – and pretty amazing. Then there is 1996’s Goes Pop!, which was originally released for 25c with an added A4 zine, and has had some of the hiss and banter cut out. Lowest fidelity, the mud at the bottom of a creek beer, misplaced, waylaid, laced with memories. A remnant of what may have been, a holographic projection of fizzing, sparking, faux greatness. Get in.