Spend Your Money on OBNIIIs 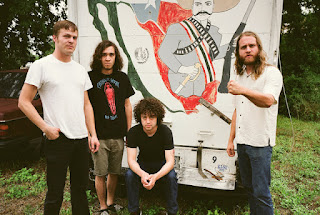 I love the unabashed hi-octane rock and/or roll that Austin’s OBN III’s push with ferocious alacrity. It has always been about pumping out vein-popping, synapse-fizzing songs that are as hook-laden as they are loud and lairy. Worth A Lot Of Money (out now through 12XU) is no different. Here the hooks are even more brazen, blazing and bloodstained – take standout track ‘You Can Let Me Down Now’, a mixture of JSBX braggadocio, Wipers stop-start magnetism and bottom end aggression, and The Clash’s laconic wails. The thing about pointing out influences and inferences on an OBNIIIs album is null and void though – Orville Bateman Neeley III and his band of not-so-merry men are only interested on building the largest, loudest monument to rock on such foundations. The fidelity here is fully glossed but never shies away from the shameless abandon and garage swagger that the band have made their bread and butter – ‘New Money’, ‘Dismissive’ (a subdued filter of Division of Laura Lee covering The Stooges) and ‘The Stalker’ spit and growl. Grab this here.