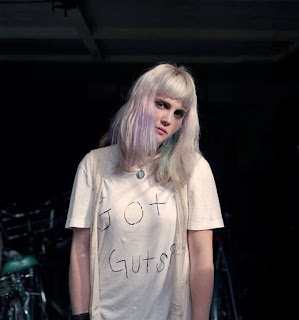 I wasn't expecting much from The Orange Glow, seeing as I never really hooked into the frothing masses that genuflected at the altar of Foxygen. But this is Globelamp, the solo work from that band's Elizabeth le Fey. And while her vocal delivery can irk, its jaw-dislocating drawls that evoke the pixie pall of Joanna Newsome or (god forbid) Julia Stone (or anyone on an Instagram-shot advertisement) somehow morphs into something more surreal, brittle and defiant, the type of psych folk that has backbone and balls with its flights of fantasy - a sun-bleached 21st century Gothic parable, leaving the Moors for Laurel Canyon. I haven't been this pleasantly surprised by something in this realm since Father John Misty abducted Aubrey Plaza - in short, this is pretty great. Grab The Orange Glow from here.