Believe in the Leaper 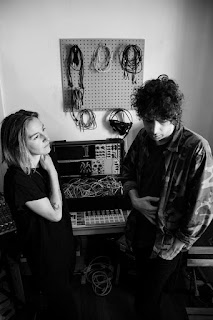 Toronto duo Beliefs have crafted a buoyant dream pop winner in their LP Leaper. Starting with the typical yet nonetheless sunnily ebullient 'Tidal Wave', the band take some nicely carved tangentials - '1992' comes out like the calendar-similar Smashing Pumpkins track covered by mid-era Blonde Redhead; the soft-lens narcoleptic grind of 'Drown' ekes out a Dinosaur Jr vibe, albeit one in the Kurt Vile end of the noise pop pool; and the title track fully embraces the duo's penchant love for Sonic Youth angularity and spoken obliqueness. It is clear that Leaper revels in the 90s afterglow - its a steady stream of a dream. Pre-order Leaper through cool little label Hand Drawn Dracula (who also put out stuff from the likes of Fresh Snow and Vallens) here.