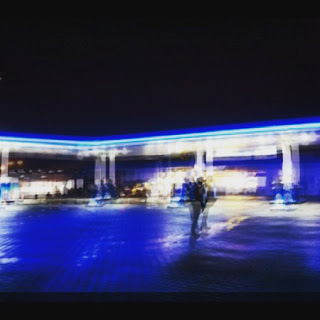 Canberra label Dream Damage (TV Colours, Bare Grillz, Assassins 88) have been a strong purveyor of Australia's underground music scene, with some great releases from lesser known acts such as the likes of Slow Violence and Cat Cat shining through. Another release they have put forth is Hyperdrive by Ace Romeo AKA Andy Campbell, guitarslinger of The Fighting League. The album is awesome, if fairly eclectic. It starts off the way I expected things to be, and continue (thanks in part to the name, and to the cover art) - 'Heart To You' kicks off with a weird baroque Euro traveller synth disco pastiche - like Todd Terje was playing in a Balkan nightclub with the barest of Rolands and a Gameboy extension. Then the guitar rocks in, live drums, and a lick that feels like a muted hair metal riff - and this is in the first third of the song. The vocals drift through, playing on the same lines of Tame Impala-lite psych soul searching, but as guitars layer over each other, with a much more insistent beat propelling things forward, Ace Romeo isn't trying to emulate those types of glories. The rest of Hyperdrive is equally filled with thrilling curveballs - the throwback pub rock riffage of 'Move To Mars' that fits into the Sydney rock'n'roll set effortlessly; the earnest 80s stadium rock mania of 'Best Friend'; the urgent post-punk meets Sharpies-esque title track; the 70s chase scene cum yacht rock malaise that tears 'Total Riffage' apart... It is honestly like Campbell has grabbed his dad's record collection, thrown it into the dryer, hit maximum spin, scooped out the shattered remains and glued the albums together ad hoc. But it works. I really like this record, and I reckon you will too.