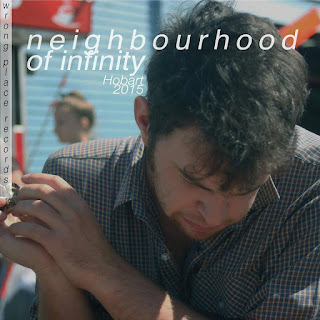 I have written about some of the weird and wonderful noises echoing out of the Apple Isle that is Tasmania, dangling down across the Tasman from the Australian mainland, festering in their own fermenting juices, insular and exciting. One of the main bullhorns spouting the wonders of this places is Wrong Place Right Time Records, and a little while back they released a wrap-up of 2015 in Hobart called Neighbourhood of Infinity. It’s suitably named after a Fall track, and chronicles every facet of warped wonder to emanate from the place. A few you might recognise from these hallowed halls, such as the food-obsessed All The Weathers (the deliciously bent ‘Beans’), Heart Beach (the warmly forlorn buzz of ‘Tegan’), Native Cats (the lyrical staccato/soapbox scree ‘Scratch Act’), Bi-Hour (the downward broken-industrial spiral schooled by an insane headmaster that is ‘Truism’) and Treehouse (jangling and stumbling through the early dawn, a jocular jig and inebriated slip to ‘Hammer At The Door’). But the delights are just as gripping from other quarters – the slow insidious crawl and shadowed incremental cacophony of Wasted Idol’s ‘Seventeen’; the bubbling stargazing spectrum hum of Filthy Little Star’s ‘Keep On Whistling’ (reminding me somewhat of the pastoral experimentation of Soda Eaves and the aforementioned Native Cats in part); the ground-out post-punk bawl and plaintive moths-in-the-wallet despair of Naked’s ‘Beer’; the sneered punk squall of Powernap’s ‘Burn This City’. It’s all wild and weird and necessary. Grab it here.