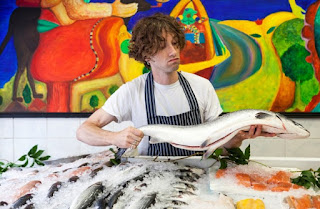 Good luck seeing the fireworks tonight in this horrendous deluge London! Doesn't mean there won't be lost limbs - it's a given, right? If you want to stay indoors yet feel the heat, you could do worse than jump on board the Big Wow train, the new album from local lad Warm Brains. One of the hardest working dudes over here, Rory Atwell has carved out a slick yet discordant ode to eking out an existence in Boris Johnson's playground, the 21st century a breeding ground for self-entitled twats, hipster gnats and the strangling of creative freedom and control. What a downer? Not really - Warm Brains has always been about carving out a leering jack'o'lantern of insidious rhythms and hooks in even the most morbid of material, and he remains on song here. From the self-serving and congratulating reprobates and zombies that litter hip hotspots on 'Languid Tarmac' to the suppression of genius by mediocrity ('Pink Blackpool Rock') and City boy fucks ('Now That I'm Boring'), every hated corner of Atwell's world is covered. A melodic earworm that still kicks out at the pricks, Big Wow is pretty great. Pick it up here. Warm Brains plays the Shacklewell Arm this Saturday, while the launch is at The Old Blue Last November 11.