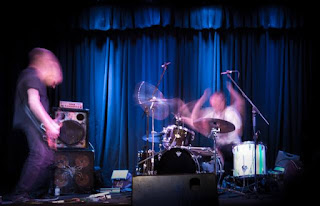 I'm travelling up through the midlands of England after a massive weekend in Oxford. I am suitably broken. My head wrapped in headphones, my hand shakily clasping a huge bottle of tepid water - and I am subjecting myself to brutality, because it's good and I deserve it.

Bro Fidelity Records is a Melbourne label that fossicks from a particular earthen vein of heavy rock. Most of the bands involved – Hotel Wrecking City Traders, Daggers Mid Flight, River Of Snakes, Fire Witch – all feature members from the same cloistered coven, all intent on creating dark yet rhythmic metallic rock that pummels in submission that seduces onto the rocks of despair – or just plain kills. Another band in this ilk is Spider Goat Canyon, and their album Always The Heavy fits this modus operandi from the album title down. 6 years in the making, and marking the last recordings with guitarist Steve Brick, this gargantuan release is a release of tension, a steeling of resolve, a Pyrrhic victory to those (un)lucky enough to hear it. A broiling concoction of drone, doom, 70s to 90s metal and elongated space rock, the album starts with a weird yet ominous instrumental track, ‘Rat Tooth’, with what sounds between a strangled sax and a strangled voice hovering in the middle distance, a muddied doom riff slowly coming into start focus by song’s end. ‘Needle Drivers’ brings the dronal vocals, while ‘Crunk’ takes metal with a glass-ripped vocal assault. ‘Vertigo’ is a faster, feverish trip – and all three major deviances has been laid out and flayed. Some of the music reminded me of my childhood (the aforementioned, early Metallica-aping ‘Needle Drivers’, the sinuous bass giving a Tool resonance to ‘Chadrick’) and some more recent predilections reared their heads (the droned feedback of ‘Heart Attack’; the cataclysmic instrumental breakdown the brilliantly deranged ‘Men’). By the time the mammoth punches of ‘Secret Valley’ and ‘Embryonic Gillslits’ hit (both approaching 20 minutes), the noise journey this trio take you on is tantamount to undertaking the Twelve Tasks of Hercules, a penance being paid, seemingly, just for being alive. But in many ways that is exactly what Always The Heavy is – a black mass, repenting for the sins of the past, present and future, yet with a twinkle in the eye that is upturned towards the stratosphere and beyond. All plains are crossed and conquered, all voices have been heard and silenced. A colossal album from start to finish.