Populating A Pyramid Paradise On Mars 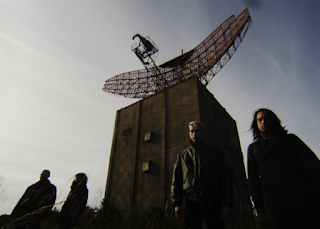 The pitch-black dirges that NY malcontents Pop. 1280 have delivered in the past few years have held me in thrall ever since I heard the dire yet droll drawl of 'Get Into The Grid'. We disappear down another rabbit hole altogether on new cut 'Pyramids On Mars', off new album Paradise (pre-order it through Sacred Bones here). It is a viscous attack on the world around us, an existential space-odyssey-in-the-gutter spear through the brain, fear and mental anguish and compromise drip-fed and invasive. Chris Bug's throttled groan and nihilistic moans evokes basement-strung goth puritans of the 80s, the murky production pierced by archaic synth shudders and a guitar death knell, a funereal march into eternity. Not as immediate as other releases, but 'Pyramids On Mars' overflows with intensity and eye-rolling unease. These imps of perversion aren't intent on infecting you with their horrors; they are now eyeing the skies.