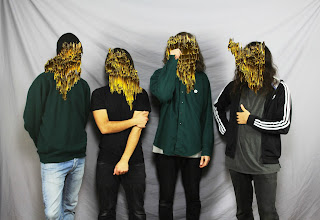 The next four posts are for bands who I sadly missed their shows here in London in the past few weeks due to various powers that be. One of the launchships for excellent Bristol label Howling Owl Records, The Naturals have just released a great debut album in Hive. The Naturals exude a syncopated, synthetic menace that isn’t far removed from the black liquid-coated honeycomb on their cover art. Outside of the percolating, sinuous melodies that wind and entwine, a sleek boa constrictor of seductive tension, the mechanised, synthesised vocals are so manipulated and compartmentalised as to become the most unnatural element at play here (excuse the pun). The core of dub throbs within, the rhythms deep-rooted and insidious. You can find allegiances to all kinds of artists and genres – while the synthetic instrumentation and kinetic drums coalesce in a Battles-worrying intro on ‘Cold People’ or ‘Cauldron’, the experimentation is far more alkaline, feral, clean yet decayed. It plays in oppositions, crafting dark mournful metal whispers around a dystopian disco core. But like most hive-minded creations, Hive is very much a sum of its parts – a breathing behemoth, quivering in its own fetid field, giving birth to its own idiosyncratic spawn. I personally could have done without the closer, funnily enough called ‘Sum’, due to its wafting psychedelic flourishes that flirted too far out of their own crude force field and more akin to something Primal Scream would create in a particularly febrile fugue state, and especially as the penultimate track, ‘It’s Teeth’, is fuelled with a futurist minimalism/maximalism that a cyborg My Disco might morph into in a garish steampunk alternate future. But in all Hive is a hypnotic gem with so many facets winking and twitching in the tectonic shadows that you will forever be getting lost in its acrid slipstreams. Buy Hive here.