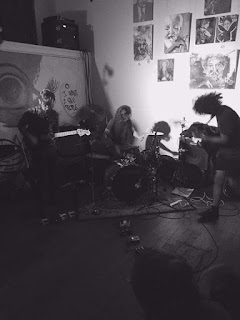 Sydney instru-mentalists Milkk have blown me away with new EP Open Signals Cast. Why? Because I haven't seen them play bar a show in Sydney in some bar in Surrey Hills in late 2013, and their fare was intoxicating in a more homogeneous, nebulous way - there was a warmth in their oddness that I embraced. That has been dissolved over the past couple years, replaced with a serrated fecundity that is just as intoxicating, just a far more jagged a pill to swallow. Take double edged bookends ' - 'Dadadada' and 'Hear The Toad' - the former a Don Caballero-shadowing sense of deconstructed turbulence, the latter a rambunctious and euphoric rouser that ebbs and flows in intensity to a tetchy frisson imbued with American Football-esque parallels of warm meditations. There are elements of the contemplative mists permeating from 'Garden of Earthly Delights', a beautiful elegiac meander that frees up the freneticism, and is all the more breathtaking because of it. Out through No Safe Place (Beast & Flood, Solid Effort), Open Signals Cast is bloody great. Too much Milkk is never enough. Get it here.