Bastard Boys Are Giggling Through Their Teeth 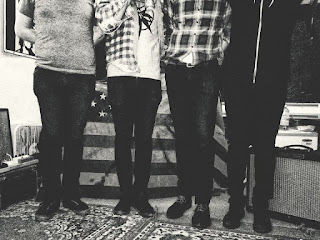 NY crooked losers loose in the Big Apple Giggly Boys have launched their debut album Bastards Of Young, and it is great - weird, beguiling, cracked. I was a big fan of their EP . (the cover my fiancee claims looks like me - she's on fire tonight, gloves are off), and the album veers into Spray Paint territory on opener 'The Hall', a track seemingly equally indebted to Ranaldo's Sonic Youth left-field takes on straighter rock. 'Crazy From The Heat' continues the cavernous production and Mike Zorman's moaned, quasi-barked and clipped vocals, yet there is a coldness here that evokes Scandi goth punk (the juxtaposition is in the name...) 'Butter Banquet' is more diseased, a (C)ramped sense of humour infiltrating these darker riffs and claustrophobic rolls, albeit with some slowed art-rock interludes and a glammed up lead back to the fever. 'Weird Lie' and 'Tiny Taste' again take a Ranaldo hue, but also evoke mid-career Blank Realm (possibly in the Daniel Spencer-esque vocal delivery). You can tell that I haven't made any Protomartyr references here, although you can hear echoes in 'Midnight Ones' or the similarly-named 'Darker Shade Of Pale'. Maybe because Bastards Of Young is so kaleidoscopic in sonic range that the references are spread far and wide. 'Country Lee' is something I wish Brisbane band-in-hiatus Nova Scotia had written. Now I doubt that Giggly Boys are into those guys - but the connections to Australian and American bands that flirt with mainstream composition before dragging them on wider, weirder slipstreams is clear. The throwback closer 'Whatever' is great too. Let's hope that these Bastards Of Young never get old - this is great stuff.

Grab the record through This Ain't Heaven Recordings here. If you are in New York tonight, head to The Gateway where Giggly Boys play alongside another new SM fave, Frog.