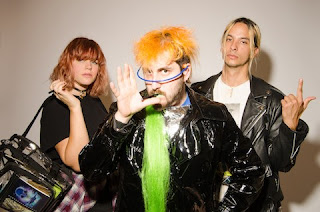 Sub Pop are making some major plays in the past eighteen months that have me reinvigorated in their utmost relevance as a label. I have always held faith of course, but with their signing of Mogwai and excellent new records from Deaf Wish, Metz, Pissed Jeans and Sleater-Kinney, their cache is bolstered. Add to this incoming desiccated salvo Neo from Seattle nihilists So Pitted. The name threw me, so when I heard 'Rot In Hell' I was punched in the face with the raw racket blasting forth. The trio manage to spew bile in tetanus-coated fury with a sense of banal diffidence that is almost offensive if it wasn't so dead-eyed brilliant. The band play out as if Pop. 1280 were electrocuted on-stage and zapped back into a parallel corduroy-and-flannel 90s cesspit, thankfully landing on and killing Green Jelly and taking their place. The orange-and-black cover art for the album (not due out until Feb next year) is stark and arresting - the colour coordination reminding me of SM band Cobwebbs, with a similar sense of gutter noise melding with slack-jawed indifference. Pre-order Neo (in white vinyl) here.