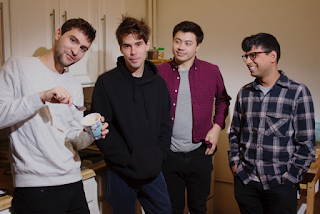 A few acidic tastes of guitar noise to fill the Xmas stockings, starting with NYC upstarts Big Ups and their new song 'Capitalized'. Starting with guttural, propulsive bassline and a mosquito-buzz guitar bend, before the drums, demonics and distortion demolish the stage, the song sees Joe Galarraga ripping his vocal chords and consumerist histrionics apart with barbed grenades aimed on at our continued downward spiral into material brand-slathered rectitude. There are moments of uneasy ease, but this is spit-flecked chaos in all its errant glory. The boys are releasing new LP Before A Million Universes next year through Exploding In Sound Records (how the fuck do they keep doing it?!) and have announced a Euro tour for March and April 2016, playing the Lexington to boot. Bring it on.