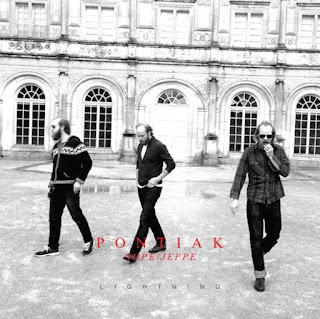 One of my favourite bands is Pontiak. I have made this abundantly clear over the years. There is something muscular, free-wheeling, visceral yet overtly relaxed and fun about the blasted psych rock the Carney brothers craft. They haven't been whipping out records with as much regularity as they used to, but that could be because they have opened their own brewery, Pen Druid Brewing. With their own home-built barn studio, and probably a self-constructed stone baked pizza oven out the back, they pretty much never have to leave home, so I totally get it. But they HAVE released something - Nope/Jeppe, a little cassette release through Lightning Records. And maybe its the locally fermented booze, but it's time to get weird. 'Nope' is a slowburn metallic whine, an ASDL panic attack and eats away at the psyche. 'Unsatisfying Nights' is a Morricone pastiche played in a 70s prism floating in amber and the rising tide of a narcotic slipstream. 'Low Plains Confuser' - an esoteric yet voiceless acoustic pastoral meander, laconic and meditative. But they haven't deserted their outsider rock - as the brawling, brutal 'Jeppe' and the ten minute White Hills meets Fu Manchu growl of 'Shit Sucks' attests. There is something for everyone here - Pontiak rides again.