We Expect You To Die! Die! Die! 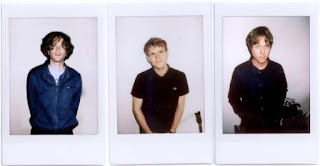 NZ maelstrom Die! Die! Die! have always maintained a frenetic disposition, even as their earlier fractured, frenzied post-punk attack found itself smoothing out into something more streamlined and sustained. This was most obvious in their live setting, which has lost none of the fevered kinetics over the years. Yet we get more of the former on ‘I Love Space Travel’, the opening gambit of new EP What Did You Expect, a knowingly named release out through Bad Health Records (formerly known as Black Night Crash Records). Andrew Wilson’s pitched wail is back, spit flecked feverish; his guitarwork as spiked and sepulchral as ever. This is all heightened by Michael Prain’s pummelling work on the drums, here as brutal as I have ever heard him, almost as if he is trying to beat his way through the core of the earth. They haven’t shirked dark melody though, with the title track a contemplative counterweight. Recorded and mixed by Rory Atwell (Warm Brains – he is on bass duties here also), it’s a timely reminder that as tempered as the fury can be, it still never dies. Grab What Did You Expect here.