The Spectre Of Radiohead Past 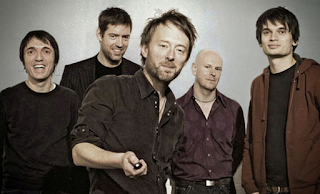 I know that a gazillion posts about this song will have infiltrated and clogged the internet by now - but Radiohead recorded a song for the Bond movie SPECTRE (which it must be said was fun but incredibly overrated - but I'm not a Bond man so what would I know?) The song takes me back to Kid A/Amnesiac era Radiohead, which played a great part in my musical "development" - I may not listen to those albums (or this band) very much anymore, but the mists of nostalgia come over me when I hear Yorke's voice wafting over sweeping strings like this. Anyway, it's a far sight better than the insipid Sam Smith in my opinion...

Email ThisBlogThis!Share to TwitterShare to FacebookShare to Pinterest
Labels: Radiohead