A Sense of Vertigo 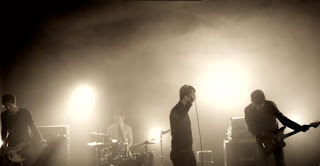 Just received the new single from Yorkshire's Exit Calm, 'Don't Look Down'. The music video is very slick, and its obvious that the band, signed to Club AC30, are getting some major push.

I have to say though that I wish Id heard the song before seeing the vid. I couldnt help but think that the lead actor was some Bowie fetishist sleazing onto some young tired thing with askew bedhair in the dark - all unsettling and kinda Snow Patrol-y.

Yet the track itself showcased some greater spiralling guitar noise at its end, a grandiose affair that uses the quiet-loud dynamic to optimal effect. They come across as brooding indie rock (a la The Twilight Sad) that hover on that precipice between pop and aggression, not knowing whether to fly or to fall - wherein lies the beauty. But hey, Im saying this on just one track! The jury is still out on Exit Calm, but they have certainly intrigued.

Their EP Don't Look Down is out in October, and they have a run of UK dates in September and October, including one at ICA on September 17th (supporting Sereena Maneesh) and at Hoxton Bar & Grill on October 14th. They were unlucky to have a gig at Electric Ballroom cancelled due to headliners Thrice pulling the pin (and as an aside - I kinda like/liked Thrice; have seen them twice, albeit a few years ago, and always start playing Guitar Hero with 'The Arsonist' - guilty pleasure haha).