Iowa is a state of mind - and from Melbourne... 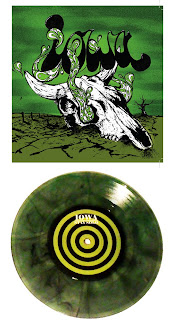 Its been quite a week for Melbourne bands here on Sonic Masala, so here's another one! Iowa are an aurally destructive indie rock three piece made up of musicians that have been floating around the scene for years now but have finally found a collective home. Their sound evokes that guitar-heavy indie rock that permeated Australian airwaves in the 90s, and which I grew up on. Single 'Stay Solo' reminds me so much of another like-minded band from way back when, Pollyanna, for its adherence to softly crooned vocals over ever rising distorted riffs. 'Weighed Down', on the other hand, manages to create a sound that gently rises, like the slow ebbing of the tide - the song initially feels as though it will break into an amiable pop rock song, but when the drums enter the frame about two minutes in it becomes apparent that what is about to be undertaken is a different beast indeed. Ive always been a sucker for loud/quiet dynamics, and with the wall-of-sound formula and the echoed shoegazey vocals shimmering over the squalling drone, this track fucking rocks. So its great to finish the week on a band that is new, good, and Australian. Even if they label themselves after a state of the U S of A...confusing much?

You can purchase the 7" here. Check out the art and vinylwork! Tasty indeed. Furthermore, the tracks were put together with help from Jack Farley, whose partnership with another great band Love of Diagrams (subject of a post later this week, just so as to continue this iPod/Australian music love affair) is evident throughout.