Glazed Haze On Our Black Vacation 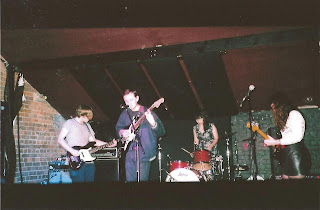 I meant to get this out sooner, seeing as their first two shows (in Newcastle and Sydney) were this weekend. Better late than never I guess... Local woozy amblers Black Vacation have just released new single 'Glazed', and its a suitably excellent track that doles out nonchalance and whimsy in equal, chiming measures. Its the most concise, crystalline effort that the Ford brothers have slapped their name to thus far (Daniel and Matt are also in Kids Cryptic and Thigh Master), whilst the added gravitas of Helena Papageorg (Feathers) and Michaela Chin (Marl Carx) helps to anchor Black Vacation's sound somewhere between the Australian slacker pop revelation and the Stateside introspective fare that the likes of Beach Fossils and Wild Nothing delve in. Excellence par none.

Black Vacation travel down to Melbourne and the Gasometer on Friday July 5 (with support from SM faves Velcro as well as Legendary Hearts and Aktion Unit), before finalising their launch in their hometown (and a Sonic Masala Presents!) at Trainspotters on Sat July 13. Supports for that one will be Cobwebbs, Stress Waves and Dag.