Get Re-Run Over By Royalty 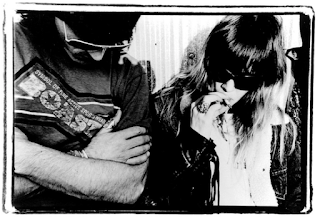 By the end of the week this little number by Washington's scuzz lords Royal Trux will once more be available to the public. Recorded in the lead-up to their hotly anticipated Euro tour in 1998 (following the critical acclaim for their LP Accelerator) the 3-Song EP was banged together in quick order (a fourth track, a cover of Dire Straits' 'Money For Nothing', was recorded as well but kept aside for a UK B-side release). The three songs run the gamut of Trux infamy - funky cold radness ('Deafer Than Blind'); wigging the fuck out ('The United States v One 1974 Cadillac El Dorado Sedan'); and the raucous balls-to-the-wall rock ('Run, Shaker Life'). It has everything in high-octane place - Jennifer Herrema's irresistible growl, Neil Hegarty's serrated guitar brilliance, whilst joined by David Pajo (Slint, Tortoise) on bass and the blistering Jon Theodore (Mars Volta, QOTSA) on drums...godDAMN! Such an electric band. And to think that the duo are back together (at least in a musical sense, releasing a new Black Bananas album early next year with two songs penned by the duo)! Maybe we will see something like this on our plates sooner than we ever thought possible... 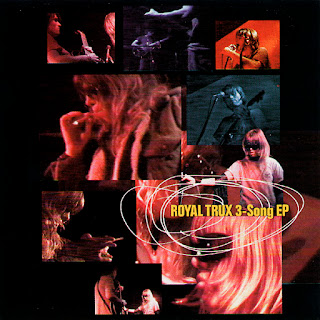 3-Songs can be gleaned on pre-order through Drag City here.