A Communal Late Night At Gaza 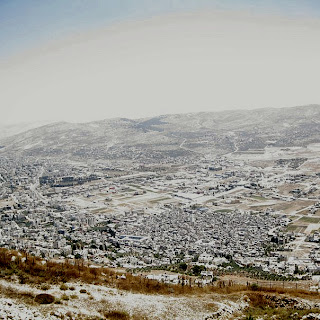 I thought I would end on this piece of ambient brilliance tonight. I'm physically and mentally drained, and 'Nablus' from NY's Ajnabi (the song is one of two abstract reflections/meditations on the situation in Palestine crafted after spending a time volunteering in the West Bank) has me close to tears. I had a conversation only yesterday with James, the guitarist from Violent Soho, about those moments where music moves you in such a way, and that those moments don't appear as often as you get older, or wiser, or more cynical...I don't know. I still remember when I saw the emotion on display at the 2009 Glastonbury when Blur reformed. I didn't get it, that much invested emotion into one thing... But songs like 'Nablus' pulls me back. Ive been looking over the twinkling lights of Brisbane, this plugged into my cerebral vortex, and I started to remember all the moments when it DID mean something: dancing to Mogwai by the side of the road at 4.30am, the fog starting to lift, the sun starting to rear its weary head; listening to Sigur Ros as the sunset lit up Mt Cook in New Zealand in various pastel hues; Radiohead causing my breath to catch when 'Like Spinning Plates' staggered over an awestruck Melbourne crowd. The list kept spooling forth - listening to My Father My King for the first time, or Raveonettes' Whip It On ad nauseum one heady evening, or when Source Tags & Codes first came out...then there is the first time I heard The Who's 'The Seeker', or Led Zep's 'When The Levee Breaks'; Alex Maas sing 'The Sniper', or Dad playing Born In The USA. All of these things are me, they make me who I am. And at this very moment, at this core second within the miasma of infinite seconds, I am Ajnabi too.

Email ThisBlogThis!Share to TwitterShare to FacebookShare to Pinterest
Labels: Abjani, And You Will Know Us From The Trail Of Dead, Blur, Bruce Springsteen, Glastonbury, Mogwai, Radiohead, Sigur Ros, The Black Angels, The Raveonettes, The Who, Violent Soho