When You Kill A Giant, Blood Pours Out (Tenzenmen Update #3) 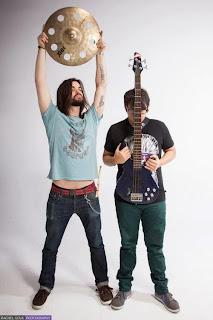 I finished up a week's look at Metal Postcard Records recently. The founder Sean Hocking sees Shanghai duo Pairs as an incredible band (and so clearly do we), following every half-baked venture the duo head out on. So to close out the week we are (figuratively) travelling back to Shanghai (via another Shaun, he of Tenzenmen Records) to look at another ex-pat band that calls the Chinese city their home, Death To Giants.  Death To Giants are even harder to define, a true amalgam of genres seemingly at odds with each other - math rock, metal, and hardcore, to jazz, pop (with moments verging on the fey)... With no guitar, the duo use yelps, a trombone and an array of collaborations (including scoring muted films, traditional Mongolian folk music and a System Of A Down tribute band) to flesh out whatever whims they come up with. Its a heady, insane mixture of molasses to swallow, especially over the course of a full album. But with Blood Pours Out, the duo start to make sense - like naive art drawn by a limbless Charles Manson might. 'Anyone Can Learn To Count In Chinese' feels like Deerhoof distilled through a Blood Brothers woodchipper; 'Jared Leto' and 'Girth vs Length' are maniacal gems that rot your teeth and eviscerate your stomach. And to add to the obliterated fourth wall, there is an instrumental version of 'Anyone Can Learn To Count In Chinese' for free download so that you can make your own remixes, submit them to deathtogiants@gmail.com and the band will choose their favourites for a future release. Death-pop indeed. 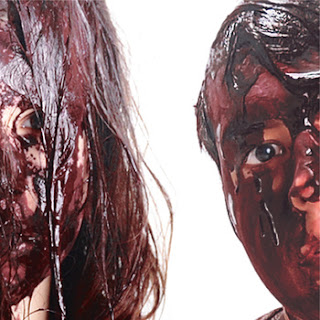 You can buy Blood Pours Out here.