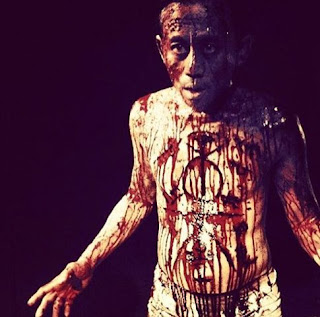 I just watched V/H/S 2. Breakdown - the surrounding story was better than the first V/H/S anthology wraparound; and each of the vignettes were really inventive with the use of "found footage" (mechanical eye and mounted bike helmet were both pretty great), yet the best by a million miles was the Indonesian cult story. Overall it's just a lot of fun - some great scares, but just a lot of fun. So let's get lo-fi and (potentially) get scared with these new tracks...

I showcased this track 'Sanity' from frontman of The Beets' Juan Wauters a little whiles ago. The vid for the song is bullshit crazy, with blunts, gimps, Juan doing psycho Z-grade wrestling against women (and Guapo!), a wonky American flag - and it's purely brilliant. "You know what country's ugly but they could have some very interesting ugly girls? England."

Some hazy rock pinned together by underwater synchronised swimming? Bed Rugs (hailing from Antwerp in Belgium) has you covered. This oscillating track 'Blinds' is off their just-released EP Rapids (out through Ample Play & Burger Records) - from this sound alone I'm intrigued to hear more.

I know even less about Montreal psych rockers Big Brave, seeing as this is all I've heard, but the simplicity and dirge held within has me very hopeful. The new song is titled 'There Is No Victory, Only Burning Flags and Fallen Men' - which I really, really like. More please.

And let's finish with this cut and paste slab of scuzzy silliness from Manchester's Spring King. I've meant to mention these guys for some time, but this dropped in the inbox over the weekend and has been played incessantly in the playlist ever since, so there is no excuse now. Spring King are probably certifiably insane, and I'm happy with that. They just supported Fair Ohs too, so the insanity is spreading.