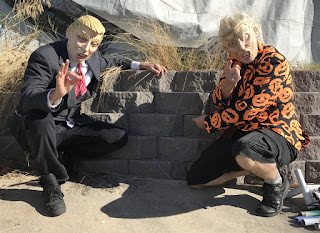 It is the day of reckoning folks - The potential beginning of the apocalypse. Sure, it's a pity Bernie ain't standing, Hillary has her faults, but Jesus wept, get Trump the fuck out of this universe. Otherwise my building a bunker in the middle of the Australian desert will be my new goal in life.


Then there is continental rabble rousers Mincer Ray (Americans, Brazilians and Swedes hulking down in the streets of Berlin), who we have featured on SM before. They have a four track release out now, and amidst the quirky electronic 180 that is 'Dental Surgery' and their more familiar Pavement-via-Modest Mouse guitar rock idiosyncrasies, there's the less than three minute (a theme evolving here?) droner 'Grab Them By The Pussy'. The vocals are distorted and screeching, a little deranged, led into the mouth of madness by the Antichrist himself. The rest of the piece is somewhat lighter in tone - even the rolling, wailing, threatening to disintegrate 'Dabs', the best track here - so let's hope common sense wins out worldwide...