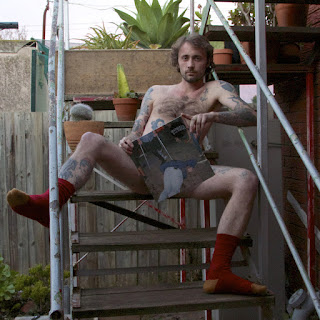 Last year Jackson Briggs travelled through Europe and played a handful of solo shows, including a couple Sonic Masala: London joints. They were ragged, rugged jams, at once broken, flayed, drunken and emancipating affairs. But it is when he gets back with his Heaters that the muscle knits together and the bruised ferocity reaches fever pitch. Listen to their self-titled EP, brought out earlier this year. While opener 'A Will' absolutely slays, especially the brutal heft lent by the band and a killer sax solo from Cayn Borthwick, it doesn't stop there. There is a bit of The Men when they channelled their inner Bruce Springsteen about 'Nothing', albeit played at dusk in a piss-streaked dirt road in the broken outback; 'Not The Man' is a buster, a brawling mess of masculinity on the rack, ruined, teeth chipped and nicotine smeared and still maniacally grinning; the mournful, maudlin 'Belgrave'; before crashing to a halting in the rollicking breakdown aptly called 'I'm Done'. The boys head into the studio with Max Ducker (Mutton) to record their first album this weekend - looking forward to the rugged shit is cooked up. In the meantime, catch the EP here.