Hi all. This is the first post from a new member of Sonic Masala, Graham - enjoy! 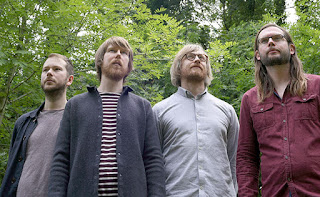 A few years ago Wolf People were ascending the folk psych ladder with 70s inspired blues-infused psych prog. They were the type of band that openly nodded to their influences; but with Ruins they have stamped their own mark with an assured and heady album. Opening track 'Ninth Night' is a scribe writing about the coming storm, with acoustic guitar swelling into a fuzz-laden groove based on the legend of the ‘Hand of Glory’ – the severed hand used to render all in its presence motionless. It is like an omen of what is to come. With the stand-out tracks of serious jammed-out wah with smatterings of fluttering flute on 'Rhine Sagas', the Sabbathy 'Night Witch', the Cream-infused 'Thistles', and 'Crumbling Dias', with its beautiful flute leading into a groove laden stomp, and like the lyric states there definitely should be no reason to leave. It is on track 'Kingfisher' where there is a moment of clarity amongst the dirge and feedback, reflecting that there is beauty all around and yet are our eyes are rarely open to see it in its truest form? That’s how you could sum up Ruins; for all the comparisons to bands of past and present they have found the balance, the beauty in their sound, and have created an album that deserves to be heard.


Ruins is out now through Jagjaguwar Records. They play Oslo tonight with Dean McPhee - get tickets here.
Posted by Brendan T