The day creeps on, and our future hangs in the balance. Scary times. I think I will close my eyes, turn these guys up, and float away, hopefully come back to a world that has a glimmer of hope left in it... 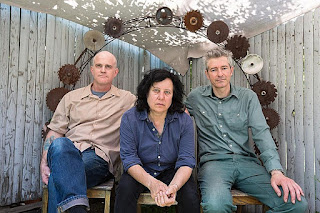 Thalia Zedek keeps herself busy travelling under her own head of steam, but that doesn't mean there aren't other, more explosive avenues to explore. Cue E, a trio featuring members of Neptune and Karate alongside Zedek, construct an intense ride, something akin to Pontiak cutting up and reworking Wrekmeister Harmonies offcuts. There is a hardened veneer here, spouting from the veteran musicians' sonic back catalogue, that puts aural calluses on each riff, roll and growl, a wizened, weary creature whose fire nevertheless refuses to burn out. Plus they can't help themselves, spewing forth the most barbed political cry in 'Candidate' that isn't Steve Albini or Ian Mackaye's doing. It's a brilliant record.  Pre-order this excellent album from Thrill Jockey here stat - it is likely to be one of the loudest, most arresting albums of the year. 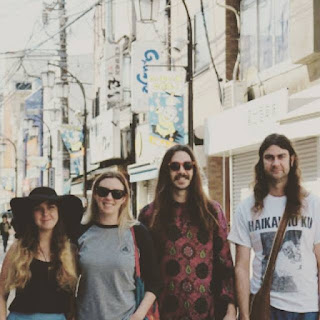 Dreamtime are back! Brisbane's premiere psych rock band are about to release their third album proper, double LP Strange Pleasures, through Cardinal Fuzz, Sky Lantern and Tym Records. The cover art suggests the now four-piece (Fergus Smith firmly entrenched in the band now) are taking a more cosmic journey into prog Yes territory. First taste 'The Sentient' is something else. The first minute and a half is the lurking debris from a haunted castle Bava film - then it ignites, a guttural psych wail that is heavy beyond words - it really hits you in the solar plexus. The sci-fi effects continue to lick the edges. Six minutes in and you think you are about to get a reprieve - and your senses are shattered like shards of glass. The brutality of the sonic assault notwithstanding, this song kills due to the nuances here too - the willingness to play with form and idea. This is going to be a huge one. 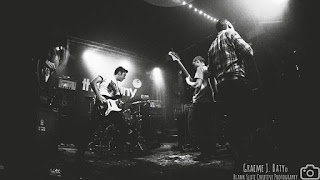 Newcastle (upon Tyne) behemoths Pigs Pigs Pigs Pigs Pigs Pigs Pigs (that;s 7 pigs for those playing at home) have been blowing speakers and minds all over the UK the past few years - my only gig seeing them was the last time I was at the Brixton Windmill, and I had tinnitus for days (not Part Chimp level, but enough to have to lip read for a bit afterwards). The guys are back with album Feed The Rats, and 'Sweet Relief' is anything but - brutal yet brief (for them), it's a Sabbathical slaughterhouse. It's out in the new year (preorder here), and will be launched at the Lexington January 21 - definitely one to mark down in the diaries. 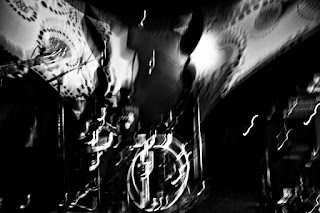 Those psych demons over at Fuzz Club Records keep gathering the biggest and best psych rock acts in the world to do something together. The latest "collaboration" is between London veteran space dwellers The Oscillation and Portuguese punishers 10 000 Russos. And they do complement each other here, trading off industrial cosmic menace with metronomic growl and bite. 'Almost See' is a lurker, a shadow dweller that wouldn't be out of place in a post apocalyptic Berlin, while 'Ashkenasi' is more motorik guitar squall, a mystic maelstrom to get lost in. Both amazing tracks, worth getting the 10" for. 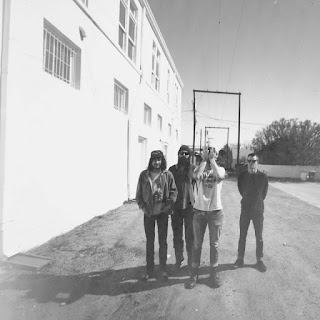 Nashville's All Them Witches have had latest album Dying Surfer Meets His Maker out for a while, but it has been soundtracking my late night work shifts when I am in the hole of marking. Particularly the cyclical dirge that is 'El Centro' - desert psych done RIGHT. There are plenty of softer planes that they travel on, but it's when the quartet hit these levels of groove that I lose my shit. They have played some great gigs over in Europe - let's hope they come back in the new year. 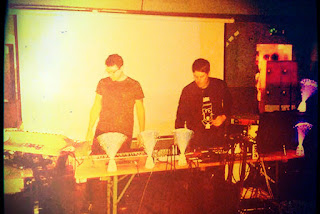 Let's finish off with XAM Duo, who are Matthew Benn of Hookworms and Deadwall's Chris Duffin. They have an album out on Sonic Cathedral. The duo delve in improvised and inexorable electronic and saxophone euphoria. First track from it 'I Extend My Arms' builds percolating ambiance that bubbles inside insistent Krautrock rhythms, a la Harmonia or the more laidback Dan Deacon fare. I'm sure that the album will be full of continual surprises - can't wait to get my hands on a copy.