"Have You Seen The Way Flies Congregate Around A Corpse?" - Christian Fitness (World Keeps Turnin' #1) 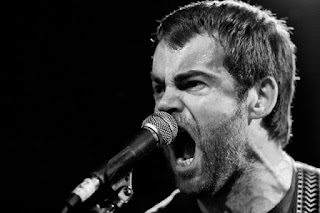 Well I can't even anymore, the world is doomed etcetera. But you have to keep trying right? So today's three posts are about three acts that always hit the spot, never give up their integrity and spirit regardless of what's in front of them.

I'm going to start with Andy Falkous - Falco, from (current) Future of the Left and (past) Mclusky. He has written some of the most bruising, eviscerating, hilarious guitar rock songs in living memory in either of the above forms. His seemingly inexhaustible cynicism and derision of the world has meant that his songs a relevant, prevalent and prescient ("You Need Satan More Than He Needs You" is ringing perversely true right about now). But he can't stop there - the geyser of angular snark knows no bounds, so he has become a one man band in Christian Fitness. This Taco Is Not Correct is the third in the CF series, and fits somewhere between his two musical guises. More of the playful guile and groove of Future Of The Left, with enough space for buzzsaw fire and brimstone that made Mclusky so energising and bracing. Everything about this album points to the crumbling present - the cover art of an angel taking a shit in shame; the opening song 'Donald Takes A Train' opens with the line "Have you seen the way flies congregate around a corpse?"; song titles such as 'Date Celebrities Or Die' and 'More Skin For The Skineaters'; lyrics that are ripped from the horrors of real life bigotry and hatred, as can be witnessed on 'Happiness Is For Amateurs', where standing up for a Chinese family being racially abused on a train ends poorly for all involved. The sound is massive for this kind of project (helped in no small part by best man and Mclusky/FOTL mainstay Jack Egglestone on drums), and goes from dirges to jaunts to spikes to sludgy punk busters ('Direct Debit With Ray Winstone's Disembodied Head', 71 seconds of madness and broken down guitar solos) and weirder outliers (is Falco trying to go all Robyn or Die Antwoord with his childlike vocals over Gothic haunt organ on 'I Swear I'll Get Married In Those Earrings'?). It's a carnivalesque gallery of grotesquery, a punk freakshow of hawked diatribes and maniacal eye rolls and brow twitches, spoken word of the kitchen sink idiot savant, scuzz pop to colour the fringes of a world gone to shit. When a line like  "if your best friend handed you his dick and asked you to fillet and cook it…. would you comply, without a second thought, without a lot of money on it?" can become part of an anthemic screed about the end of the world as we know it, you know you are on to a winner.

Falco, please never change. We don't have Lenny Bruce or Bill Hicks - but we have you.

NOTE: FOTL are touring at the end of the year with the likes of USA Nails, Idles and Death Pedals - their show at The Garage (apparently their London home) December 1 promises to be massive - get tickets here).