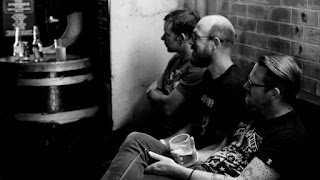 Everyone keeps yelling about 2016 that it needs to get in the bin. A lot of awful, disgusting, despicable things happened, sure - but hey, a lot of beautiful babies were born, friends and loved ones to embrace, people banding together as a community against the seemingly ever growing mindless hordes of misogynistic/racist/bigoted/violent drones. We have to hold on to these, nurture these communities, tirelessly fight for them to grow and exist for our and future generations.

To go to a micro rather than macro situation, you can look at your local music scene, pretty much anywhere in the world, at any time in history. It is always a matter of kicking against the pricks, trying to express yourself and others, to keep open avenues of thought and inclusion, safe spaces for creativity and productive, exciting dialogue, to harbour communities of diversity and positivity. As places shift, as democracy and consumerism predicts that every market become a one-sided fight for the haves (money) and the have-nots, we see loved and occupied establishments devalued, sold out, closed up, vilified, abandoned. We see the landscape moulded into the faceless oases of monied tastemakers, corporate mouth breathers and dollar-sign-eyed smash-and-grabbers, trying to ride the wave of lucrative feasting before the carcass is stripped of flesh, energy, ingenuity, til all that's left is a vapid wasteland. We see it generation to generation. And as bad as all this sounds, there will always be those that refuse to change, that resist the mutation of their imaginations, that adapt to wading through the broiling tides without compromising their ideals. It has always happened, and I hopelessly, positively believe it will happen again.

Which leads me, vicariously or no, to Turnpike.

(excerpt from performance at this year's Sonic Masala Fest)


Context: this is the band that I always attribute to being the reason Sonic Masala exists. There were a multitude of events, moments, conversations and hallucinations on that feted weekend in Minehead in 09, the My Bloody Valentine curated ATP Nightmare Before Christmas (live - MBV x 3, Sonic Youth, Dirty Three, Lightning Bolt, Fucked Up, Swervedriver, A Place To Bury Strangers, Th' Faith Healers, De La Soul, Lilys, Witch, Robin Guthrie, etc etc; then all the shenanigans in and around all of this sonic beauty and brutality), but the clearest thing for me was staggering through the door to my chalet at 3am, a party of friends and strangers in full swing, and putting on 'Do The Broken' from the Brisbane trio's Humans Find Patterns album, now a decade old. Everyone stopped. Everything stopped. The drink and drug fuelled euphoria was spiked with adrenaline. What was this? What was this? I talked about the band to everyone, I made a beer curry with my mate Paul, and SM was born.

I even remember when I saw them for the first time - 2002 4ZZZ Market day. There to see 6 Ft Hick The Celibate Rifles and Ed Kuepper, amongst other things I have forgotten now, I stumbled across two bands that blew all bar 6ftH away - The Mess Hall (my love for this two piece would be hard, fast, short-lived) and Turnpike. Adam with his skewed cap, writhing guitar strangling, aggressive yet sinuous fretwork, his head waving to and fro across the mic so that every third throttled word was almost made out; Tim's bobbing body, bassline gargantuan and intense; Chris' brutal pummelling, seeming both lulling and punishing, but always propulsive. In the heat of the early October sun, I was forever marked.

Their wiry, wired, sometimes head-scratchingly insane live sets and song compositions became whispered legends that people around Brisbane and indeed the rest of Australia heard about, yet found hard to witness in person. It wasn't so much because they were hidden - it was because they were such a unique, one-of-a-kind band that did things their own way, which in this case was randomly, expressed exactly when the mood arose, with little to no fanfare, no fuss, no push for adulation, drive for commodity or care for continuity. Every set was unique, the band shapeshifting, playing with form, type and patience, but always, indomitably, Turnpike. The fanbase was small yet Juggernauts, punishers, acolytes, the marked ones. Blistering releases - an EP, an album, some tracks and CD-rs here and there...and then...

Fifteen years go by, and so does life. Marriages, families, home lives, occupations, financial boons and woes. Time dwindles, is stretched in infinite directions. The bulldozers of "progress" flying the flagship of chrome-and-steel-and-multiple-J-letterage desecrate the holy grounds that Turnpike and many bands of that era made holy. The old guards stand aside for the new. Shows become less frequent, much feted, barely attended. The fanbase remained core. But the new generation kept hearing the whispers. Catching glimpses. Not comprehending the abject idolatry, but not leaving unscathed either. What was witnessed, glimpsed, das not compute. Such fury, ferocity, abandon, intellect, generosity, tenacity. Yet the fires were lit.

2016 and finally a second album is here. Where There Is Nothing seems like a dire outlook yet totally suitable moniker for these clutch of songs. Seven years and many different recording periods in the making. People behind the scenes (namely Cam Smith of Incremental Studios and Tim Brennan of Tyms Guitars, plus the supporters and friends too numerous to mention) kept the fires burning. The ruminations on the world and its infinite wondrous and horrifying possibilities proliferate the ideas fuelling these nine long-gestating songs - and they sound pulled out and spewed forth, soul-bearing through angular aggression/transgression. The dichotomy of beauty and insight coming from a brute idiot; the beginning and end of all things, and the simulation/repetition of such things; ghost maps; the possible death of the universe as we know it in a scientific setting as opposed to a finger-on-the-red-button scenario. It is all there.

As you can see, this isn't really a review. I don't feel equipped to review this album any more than what is dribbled here - the history of this band, its importance to me and to the music scene of Brisbane, the fact that there are bands of this ilk growing and encouraging every major underground music scene - and others growing to take their place - I'm too close to the heat of the furnace. Recently Violent Soho were given their own "plaque of fame" in Brisbane - and they used the opportunity to shout out Turnpike (alongside the likes of The Quickening, Eat Laser Scumbag and Dick Nasty) to have helped pave the way. It's already happening. There is hope. There is truth. There is Turnpike.

Grab Where There Is Nothing now through Tym Records.