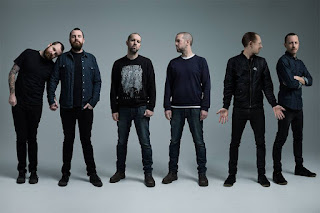 I had to step away for a bit after the Trump implosion/possession, and breathe. But there is one more post that I wanted to put up that best outlays the hope that rugged tenacity and no-fucks honesty will prevail. It is reconciled by another band that does things in their own inimitable way, that despite the same familiar life decisions and obstacles that face us all (and the focus of my last post, Brisbane's Turnpike) and other creative outliers, they ensure the same aggrandising grievances are railed against, the fights for their compatriots and the disenfranchised fought and, if not won, left to fight another embattled day. The older, more battle scarred and weary the trio get, their anguish and anger remains unbridled.

The Nation Blue, starting their rugged working class throttled punk rock in Tasmania before anchoring down in Melbourne, are another of those blood-sweat-and-beer-tainted-tears bands that rally and toil, roaring until the cords in their necks thicken with blood, like knotted nooses of discontent, whose politicised passion and rabid vigour precede them and echo around the world. The more they lessen their workload and presence, the bigger the reputation and murmured myth. It doesn't matter how often Tom throws his guitar around his neck, into the wall or speaker, bludgeoned against his own crosstitched forehead; it doesn't matter how much Matt and Dan lay down brutal, pummelling rhythms, coalescing into cacophonous calamity and catharsis - it always feels like an exorcism not wholly won over, the well of anger and disappointment seemingly endless.

And what with Wednesday's US election results and Australia's own political cesspool, it does seem like retribution or revolution or even the subtlest forms of appeasement are at the end of a very long, winding, poorly constructed and claustrophobic tunnel.

The trio have returned with the eternal fire in their bellies at the right time, kicking against the myriad pricks on not one but two albums, both out through Poison City Records. I'll start with Blue, which features a black and white photograph of a forest filtered with a dense fog - both foreboding and starkly beautiful. The album follows suit, a melancholy yet charged exploration of disquiet and anguish whose personal gnashing of the teeth owes as much to Lyngcoln's other major project, Harmony. Focusing on depression and death of loved ones; the natural and unnatural fears of being a new parent; fatigue, desperation brought on by a deluge of media-spewed exaggerations and lies; the ever-widening chasm between class groupings, aspirations and outlooks; the degradation and idiocracy of a humanity that you at once love and loathe... Ending with the broken howls of 'Black Light' possibly encapsulating the insular fears expelled into teeth-rattling emotion that the boys do better than anyone else I know. Fucking wonderful, soul-destroying, purifying stuff.


Black is more overtly aggressive yet no less edifying. The cover art says all here - a black and white painting of Australia's House of Parliament warped and melting, a mixture of naive art and magnifying skewed vision. It's stepped up, outside the singular man and into the populace, politicised, brutalised, purging. 'I Have No Representatives' is Lyngcoln screaming in reverb for almost a minute, nothing mirroring back at him bar his own tar-black vitriol at the state of affairs the world has fallen into. The perfect rant for an album that exposes the contradictory nature of abject patriotism, using the flag as a foundation for base racial vilification, detention centre hypocrisy and gross negligence, the turning of blind eyes from very clear genocidal warfare that is funded by the 1st World "heroes", the evisceration of gender politics, the continual misuse of foreign policy weight and (ir)responsibility. Every song, regardless of subject matter, revolves around violence - physical, mental, emotional, social - and its redundancy. Closer 'Beat That Man' says it explicitly, but it's
'Wild' that presents it perfectly - take for the wilderness before it disappears or becomes commodified. And any band that has a song referencing one of the nation's unsung bands Venom P Stinger and has it reviewed by Gocsy has raised things to an all new level.

If that isn't enough, lap your laughing gear around these demos from where it all began. The fruit never fell far from the tree, and thank fuck for that. Thank fuck for men like The Nation Blue.
Posted by Brendan T