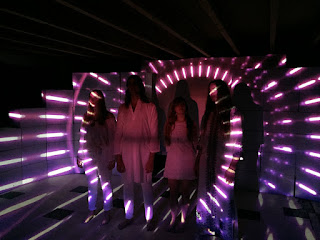 Only a couple weeks out now until Brisbane megapsychs Dreamtime release their third album, the gargantuan double LP Strange Pleasures, out on Tym Records (Aus), Cardinal Fuzz (UK/Euro) and Sky Lantern (US). A couple of weeks ago I laid down the molten mess that is 'The Sentient', and today we have an exclusive peek at another song from it, 'River Sprites'. It opens slowly, a narcoleptic time lapse, aided by desert drunk guitar and crystalline chimes. The footage (put together by the band's drummer Tara Wardrop) is Dreamtime in all their glory - looking both ethereal and earthed, dragging drugged dreams into reality, the clip is slowed down and fuzzed out, like a lost footage VHS from 1992, found in a phosphorescent cavern in Chile. The slow-burn high permeates sight and sound, a spinning room of lazily adjusting third eyes - the breathy soaring sighs accompanying Zac Anderson's drawl steering the track into sepulchral pagan heavy folk territory. It certainly plays out at the other end of the psych spectrum that 'The Sentient' (and indeed much of Dreamtime's back catalogue), a heady slice of hedonism that further stokes the fires of anticipation.