Coolin' On The Carpet, Listenin' To Shrapnel Radio 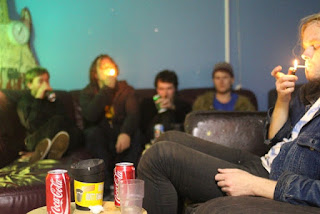 Brand new Brisbane label Coolin' By Sound aren't content on releasing, as their first foray, the much awaited debut from louche punks Thigh Master (see what I said about Early Times here), but have another hot off the presses to slam into your solar plexus. Tranceplanetsugarmouth comes from Shrapnel, a Sydney collective fronted by Sam Wilkinson (Day Ravies, Mope City, King Tears Mortuary). Once a solo venture, Wilkinson has roped in members of Miners, Dollar Bar, Julia Why? and Weak Boys (who also have an album on the way) to flesh out some rough, raw, yet sugarcane sweet guitar pop classics. Too many adjectives there, but bear with me. The album is a languid opus of wry, sun-drunk catharsis rabidly in love with classical pop convention from the cracked underground gods. There's the Kinks in simple cyclical ditty 'Fraction Man'; Superchunk via Guided By Voices hum/squall/warmth of 'Leap Year'; the early 00s indie rock nous of Gaslight Radio in the brilliant soaring wind-out of 'Another Year' (one of my favourite songs of the year). Almost every song is a drunk harmony, Wilkinson slinging his arms around the shoulders of his cohorts as he sings about the fraying infrastructure of a beaten-down scene and the stubborn weeds that continue to sprout through the cracks, mid quarter mid life crises, finding a dinghy to waste away on in a sea of roiling insecurities and inanities. Each song has odd flubs, cheap-pedal effect warbles, production doodles - constant reminders that these guys love crafting perfect pop nuggets before cracking the beers and digging deep into the art supplies in a flurry of cutting, pasting and naive abstraction. Yet there is sinew flexing beneath the seams; gossamer coating the rust and rattle. Shrapnel is at odds with the beautifully formed pastiches on display here - a burnt orange decoupage of damaged delights.

I may have put out Liminal Zones, Day Ravies' second and final album, a release that I am eternally in love with - but I don't mind saying that Tranceplanetsugarmouth supersedes it through ragged, crooked grin ambition.