Tyvek's Origin In The Red 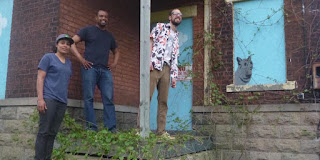 There is a moment every six months or so that I remember how much I fucking love Tyvek. It's a weird one - Ill hear a chord, a droned deadpan drawl, some cathartic clatter, and the lightning bolt hits - "Shit, Tyvek do this so much better. Now, where are my records?" And I am not the only one - both Parquet Courts and Protomartyr have recently stated the Detroit trio as being one of the most unheralded bands in the US (calling them "the Michigan Talking Heads", no less). Hell Ill meet you and raise - in the world. Brisbane was incredibly lucky to have Tyvek play at Greenslopes Bowls Club a few years back, after they had brought out last LP On Triple Beams - a true live highlight.

Now after four years, and Kevin Boyer having moved to Philly and formed The Intended (who have also recently released an album), you might think Tyvek have hung up their spurs. But no - they are prepping to release Origin of What through In The Red Records, and the songs off it so far have been great. 'Girl On A Bicycle' is a 90 second blast of about as close to pop as these guys are likely to get that isn't breakneck, despite its brevity. The title track is a lurking in the gutter dirge, something darker and desultory, Boyer's lyrics both a fear of the changing of the world and his beloved Detroit for the betterment of the 1%ers, and a clarion call to identify where we come from, if from anywhere at all - the more recognisable Tyvek then. Grab Origin of What here.