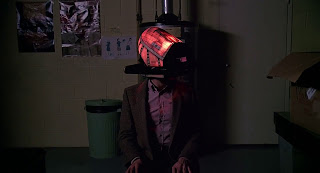 This weekend I thought I would pull some of the old staples back out of the bag. So let's get into some videos, with a pumped up version of Video Vacuum!


King Gizzard & the Lizard Wizard are bloody unstoppable, aren't they? You blink and they have put out an album and have played three festivals. They are about to tour their own festival Gizzfest around the Australian nation, and have just gone on the record saying they plan to release FIVE albums in 2017. No wonder the likes of Thee Oh Sees and Ty Segall love their moxy. I had planned to show some of their stuff that they released during the months' sabbatical I had - 'Gamma Blade' from this year's Nonagon Infinity is exceptional - but they already have this up. 'Rattlesnake' is the first taste off new album Flying Microtonal Banana (see? After John Dwyer's heart!). The tonal change is a deliberate experimentation - they have put limitations on themselves to play modified instruments that play in 24-TET tuning - this includes keyboards, harmonicas, and a Turkish horn called a zurna. The boys get their trance on, and it's bloody great.


In my opinion Texan titans True Widow are one of the most underrated bands doing the rounds the past few years. Their latest album, double LP Avvolgere, has their "stonegaze" aesthetic particularly claustrophobic and euphoric, perpetually toying with these supposed oppositional forces. The single 'F.W.T.S:L.T.M." perfectly encapsulates this dichotomy - a slow gloom and doom dappled by the occasional cold shard of light. The brooding, slowburn film clip is stark, beautiful, and a perfect complement to this great song.


Greg Charles launches Rough Music December 2 and it promises to be a rollicking yet bruising rock album of personal wrack, ruin and redemption. Charles has recorded his own video for opening track 'Doin' It Clean', and its a lo fi winner. Anything that glorifies a Gold Coast Timezone  amidst more stock footage of passenger window landscapes and spinning lights is going to be a hit with me - but the frivolity yet frayed freneticism to the work mirrors the strength taken to rediscover the muse when the narcotics that fuelled the fire are gone. The demons have been hunted - this is only the beginning.


LA doom duo Big Business are back with Command Your Weather, a more "palatable" slab of gurning dirge metal. The film clip has suited businessmen laying down the law to punk rock women, before the women turn the table in a The Craft via Troma way. The pink polo shirt wearing dude who gets turned into a butternut squash is a particularly nice touch. The tribal cymbal run will get me every time too. Welcome back boys.


New Yorkers LVL UP are finishing up their very extensive US tour tonight in Ann Arbor in support of Alex G, dragging their excellent Return To Love, their first on Sub Pop, and will be plaguing the UK and Europe in the spring next year. The album veers wildly across the spectrum of the new label's oeuvre, with 'The Closing Door' caught between retrospective whimsy and 90s guitar rock meltdown. The indie movie vibe of the clip, as nature documentary as it is slo-mo The Kings Of Summer rites-of-passage fantasy, is slick and very impressive.


El Paso psychers Holy Wave are halfway through their North American tour too, in support of their new LP Freaks Of Nurture. 'Magic Landing' is a short lysergic surge, a fisheye animation of the band playing amidst spinning pastel colours and fishes. A quirky trip, highlighting the brevity and the brashness of this underrated band.

Let's finish off with two lo-fi efforts from London acts. First up is 'Taxi Feelings' from Brunch, a taster off upcoming album Big Water. Its a bit of scuzzy guitar pop that if you are familiar with the bands we have championed and put out on our label would know it really strikes a call. The super slow motion of a terrible attempt to scull a third of a pint glass and the painful (although no vomit flies on camera) consequences. Silly boys do silly things - at least it can be thrashed out with a good tune before the obligatory taxi home and cleaning up fee.


Then there is 'Tono Tono', Giant Burger's offer from their Giant Burger Forever record. The agit-pop flavour common with lovers of the band is present and accounted for, a louche and loose post-punk wind down, and the film clip has the humour front and centre. Lots of running around parks and side streets, shouting into the camera lens, pictures of ceiling fans, Persian rugs and toads amongst plenty of other weird shit, and a light at the end of the tunnel that leads to a tabby cat. Fair play. Their next show is a corker too, alongside Goldblooms, Dog Chocolate and The Jelas, at DIY Space - see you there.
Posted by Brendan T