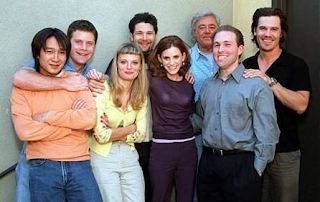 I'm going to be quick with these, loose with the PR and bios, and just have at it because it's been a long fucking day...I really need to get the band back together...

Straight from the horses' mouths about the Eagulls new video/track 'Moulting' - "The lyrics in this ‘number’ are reflecting my feelings of how I felt I had nothing left. Everything I’d done so far in life just seemed to be worthless. I wrote most of the song in my freezing cold bedroom which is the size of a single bed. I would wake up wet from the damp all night and my feet would be covered in mould off the walls and I’d had enough. It felt like I was dropping to bits like a cat loses its hair or a snake sheds its skin." Life doesn't feel so bad now does it? Eagulls have some cool shows coming up if you are UK bound in the next couple months (although their incredible support score with newly-90s-angst-burst Cloud Nothings is sold out), especially seeing as they are supporting Liars in Norwich before running around with 2012's Scandinavian punk sensations Holograms (if there's a new one of these every year, it will be fucking amazing, everyone else can give up music).

An Introduction To… is a new series of compilations on Mute of Sydney-via-Melbourne-via-England-via-Berlin post-punk deities Crime & The City Solution, with the tracklisting chosen by the band. For A History Of Crime - Berlin 1987 – 1991, the band has selected tracks from the three Berlin era albums: Shine (1988), The Bride Ship (1989) and Paradise Discotheque (1990). The album also features the band’s swansong, ‘The Adversary’, from the film Until The End Of The World (Wim Wenders, 1991). Simon Bonney is a great writer, and seeing that Mick Harvey (The Bad Seeds) was in the last two true incarnations, and Troy Gregory (bass, The Dirtbombs/Swans/Spiritualised) and the Dirty Three's Jim White is currently playing drums for them, they are an incredible band that were much overlooked, so to see them out and about once more is truly exciting. Listen below, then go back and get everything - Mute are making it easy for you...

Ruban Nielson may have been the first to climb out of the Mint Chick wreck with last year's breakaway warped pop sensations Unknown Mortal Orchestra, but brother Kody (along with bassist Michael Logie and ex-NZ chanteuse Bic Runga on drums) isn't far behind with psych pop mutation Opossom. The debut record Electric Hawaii comes out on Fire Records in August (it's already out here in Australia), and this is the second single (and one of the best tracks). Unfortunately the bastards are playing the same night as my Sonic Masala-endorsed Iowa album launch here in Brisbane (that's Saturday August 18, at the Waiting Room, you should all totz come!!!), but I'm sure they will be back. Plus they are touring the US and Europe in the latter months of 2012 so they will be busy bees...

Finally we have Bristol, UK act Idles with second single off their Welcome EP (which only came out two days ago on Fear Of Fiction Records) called 'Germany'. I wasn't sure if I would dig this, but it's doing the do today, and the vid is weirded out AND has interpretive dance - what's not to like? Get up and cut those weird shapes in a work cubicle that isn't yours, go on!

Have fun? Yeah...NOW GET BACK TO WORK!
Posted by Brendan T