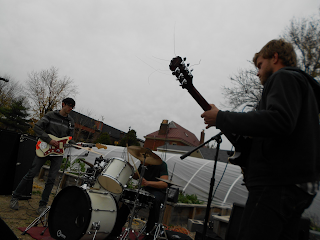 Talk about an about turn. A couple of months ago Kentucky label Sophomore Lounge Records released Fear Of Suffering, a 7" by seemingly newly-minted Louisville band Tropical Trash. Never heard of em? Well, the album is full of dissonant, warped rock, alternating between the driving despair of 'Baltimore' to the frenetic noise of the other, considerably shorter tracks - something akin to And You Will Know Us By The Trail Of Dead attempting conceptual grindcore. Extreme guitar - by brass men? Yep, these guys are the horn section of SAPAT, whose evilly cantankerous Mortise & Tenon LP on Siltbreeze back in 2007 was pretty impressive. And it isn't entirely a surprise - hear the off-kilter squall on 'Pentagram Ring Finger' for example. And 'Burning Ghost' could be a nerdier Hot Snakes... Yet it's a rhythmic trance of dissonance that is strangely transfixing - and far too short. Incessant murky anti-math? Can't wait to hear what they have coming up for us next. 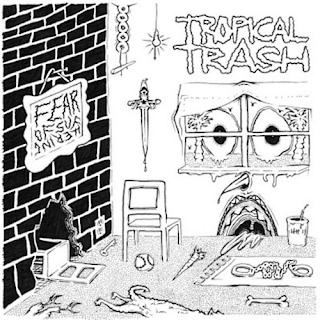 You can (and should) grab Fear Of Suffering here.

Email ThisBlogThis!Share to TwitterShare to FacebookShare to Pinterest
Labels: And You Will Know Us From The Trail Of Dead, SAPAT, Siltbreeze, Sophomore Lounge Records, Tropical Trash