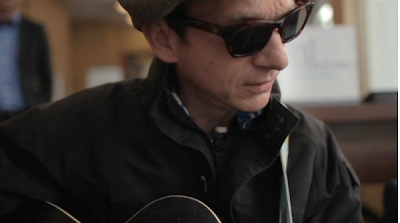 Sonny Smith is an iconoclast in San Francisco, a city that seems full of them. His work with Sonny & The Sunsets needs no introduction (especially seeing as it has as members Tahlia Harbour of Citay fame, and one Kelley Stoltz), but the truth is that the man is just as interesting as the sonic stories he weaves. His elaborate tales stem from a youthful attempt at scriptwriting whilst he busked his way around Central America, the characters and dialogue and setting all painted vividly in his head like a wide angle panorama, playing out in the theatre of his mind. He has since lived out the dream of seeing a short go through all the way to completion, as well as writing and producing plays, writing columns, acting and obscure musical art installations. He's a bright shining star, and now you can delve into two other facets of this hard-working man's oeuvre.

Firstly we have the third album from Sonny & The Sunsets, Longtime Companion (out through Polyvinyl Records). It's being touted as his "country" album, (which shouldn't be much of a surprise to those familiar with Smith's other band The Fuckaroos) and true to form Smith has delved fully into this realm. In many ways this genre speaks most true to his whimsical tales of outsiders and reprobates, failed loves and bitten nails, beaten down drifters and hopeful dreamers. Things are slowed down from a swagger to a melancholic shuffle, but the wonderful language is the same - most notably on the reworked 'Pretend You Love Me' (which appeared on previous LP Hit After Hit), which has transformed from a doo-woop swinger to a heartbroken tumble in the dirt. This is a very solid album, and a testament to how Smith's songwriting complements just about any genre. Best of all, when his heart lies shattered around his feet on the wooden saloon floor, Smith is wryly shaking his head, smiling wistfully, dusting off his denim coat, and moving right on. You can buy the album (in 180g yellow vinyl, no less) here.

Sonny & The Sunsets - I See The Void 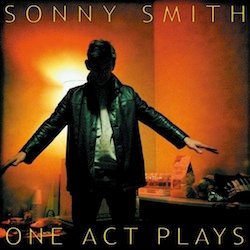 The second release is more of a re-release bu SF label Secret Seven Records of One Act Plays, Smith's "solo" record of 2006, seen here for the first time on vinyl. Featuring the likes of Jolie Holland (The Be Good Tanyas), Neko Case (The New Pornographers), Mark Eitzel (American Music Club), Andy Cabic (Vetiver) and John Dwyer (Thee Oh Sees) amongst others, One Act Plays "started out as real one act plays written for the theater, but in writing them I began to make them songs at some point," Smith states. "I can’t remember when this mysterious shift happened. However, ultimately the plays as songs were performed on stage in a play called The Dangerous Stranger, so somehow it came full circle. The Dangerous Stranger was supposed to be about reality being the dangerous intruder of fantasy, and fantasy being a dangerous intruder to reality. I can't remember if the play was successful at conveying this idea at all. That was the kinda stuff on my mind at the time I guess. I had a few influences at the time I was writing them. One was Terry Allen's Juarez, a concept record with recurring characters. Also I was really into Sam Shepard at the same time so I was reading a lot of his stuff. A few of the songs, like 'Eddie and Rita' even have some stage directions lifted directly from one of his plays. The song 'Following Father' took a bunch of facts from my dad's cousin, a Texan who always had some get rich quick scheme that never lasted. I was trying to make some kind of Tennessee Williams like thing apparently. Epic! Large! Family! Redemption! Well, anyway, most of these plays are fictional, except for 'Freaks In Space' and 'Honey Roy Rockwell'. Those two are the complete truth. The terrible truth." I especially love the loneliness and longing that leads to desperate sex that underlines 'Troublesome Affair', Smith's duet with Case, but they are all great. You can grab One Act Plays here.