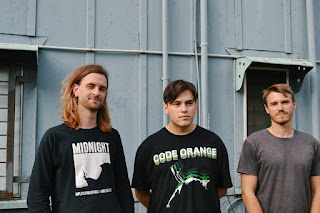 Figures is a band from Brisbane that like their 90s guitar rock to be sparse yet dark, ruminative but destructive, maudlin yet cleansing. There are checkpoints across their three tracks on their Taekare EP (recorded at Incremental Records) that evokes Dinosaur Jr, Pedro The Lion (especially in the quieter moments of 'Figure Eight'), Sonic Youth...and another band enamoured with the blanket-bomb noise of shoegaze, Melbourne legends White Walls. I seem hardwired to dig bands that take the shoegaze noise aesthetic and give it a brittle edge, stripping away the dreaminess, even the dreariness, to lend it fire. Swervedriver had moments like this, to be far, but it seems like it's the younger bands that have found that serrating the fuzz and distortion gives new shadows to lurk in and burst out of. It's early days to be sure, but Figures look the goods.