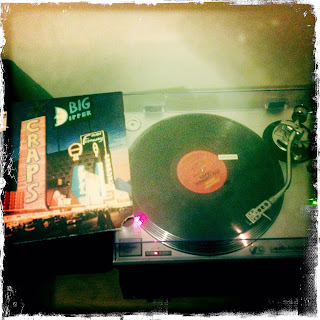 It was six years ago that I started this blog. Six years! Bloody hell. I have gotten a lot out of it for sure - not money mind, but satisfaction, connection, commitment, friends, family, love. There have been collaborators (co-founder Paul, Ani, Sonic Masala Records alum Nathan), but it has been mostly me on my lonesome, draining hours and days, sound hearing and good posture from my life. It has caused strain on my work, my finances, my relationships. But I wouldn't have it any other way.

Sonic Masala hasn't changed much in the way of its structure and output though, and if I find the time (and probably money would help) things might step up a notch in the second half of 2016. And so with that in mind, yes, there are going to be changes this year. Most of them will most likely remain small - like this one. I am going to buy random records in charity shops and bargain bins around the world, and see how I fare. 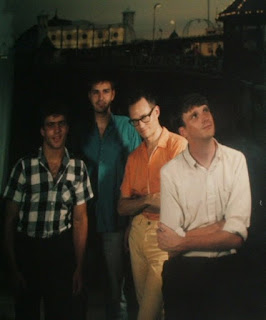 The illustrious first cab off the rank for my Lucky Dip? Craps, the 1988 second album from Boston band Big Dipper. Three pounds at a charity store in Streatham, south London. I picked this one because I felt like I had seen the cover art before (see below) and how on the gatefold the band members all looked like they should be in different bands - Bill Goffrier in Talking Heads, Hot Chimp or a sideman to 80s Paul Simon; Steve Michener in The Housemartins; Gary Waleik (who also is the only member seemingly fully comfortable with full frontal camera eye contact) in Pavement; and Jeff Oliphant (despite his Saucony trainers) having come off the ranch to play drums in a pub rock covers band. This is 1988. I love all of these looks. And, I have to say, Craps is a winner.

'Meet The Witch' is a power pop whimsy that would have been a bigger hit had it been around a few years later - it's the kind of ebullience that I am normally derisive about, but after listening to the album as a whole a few times I found myself getting into it (hookworm that it is). 'Ron Klaus Wrecked His House', a song about Goffrier's former bandmate, is a mainstream Pixies tune - more mid-tempo but enough crunch and clout to give it heated kick. 'The Insane Girl' is sparked by double-guitar attack and a darker swell that I think lifts the album even further (well, almost - I'm not sure if it's my stereo, the record or the production, but Michener's bass has a pop that really irks and should have been dampened). 'Semjase', meanwhile, shows great lyrics from Goffrier in a track that The Shins sound like they cribbed wholesale (the recording below is Goffrier in another band, 626).


'Stardom Because' starts the B-side, a punchier number that is more (to me at least) poppier Depeche Mode with a Smiths guitar break and propulsive drumming, and almost like a precursor to where the band would end up on the major label scrapheap only a couple years later. It's a great little song. For me the rest of the bottom end flags - 'Bonnie' and 'Hey! Mr Lincoln' are MOR tracks that don't stick for me - an acoustic ballad in the former, a buoyant yet lightweight number in the latter. 'The Bells Of 'Love' again takes a Shins sheen (could be more Goffrier's vocal proximity to James Mercer) but for me is dated and doesn't linger long. But the album closes on a real high with 'A Song To Be Beautiful'. Sometimes song titles give away the atmosphere and tone of a song - not so here. A brash, raucous blast that could be cantankerous Neil Young, even moreso brushes of Mission Of Burma. And even more prescient for the band is the lyrics here - "For a song to be beautiful/The artist must be free..." It's letting the freak rock flag fly, and I really wish there was more of this here.

So what happened to Big Dipper? Like a lot of bands back then, they were snapped up by label execs who wanted the next REM, plastered the next release, 1990's Slam, with bullshit production and effects, burying their obvious charm and hooks in pap. Once it didn't fly, they were kicked to the curb - because there were plenty of other bands on their roster that could fill the space. The band have somewhat reformed in a slightly different format and are playing shows around Boston I think. I will have to dip into their earlier stuff, the album Heavens and EP Boo-Boo, which are apparently even better.

Lucky Dip is likely to be a monthly concern, but I have two more saved up to come in the next week or two. The next edition is a band that featured on Touch & Go in 1989 - can you guess what it will be???
Posted by Brendan T