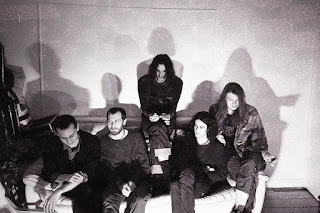 It seems to be every week that I am discovering a new band in London - which makes sense seeing as it is over 7 million people's worth of working, rutting, fucking and dying going on. And right now I have been all over Ulrika Spacek, a five-piece with a heavy predilection for Spacemen 3 sonorous ephemera and walls of noise threaded with a nonchalant curiosity for the darker spaces, content to whir and march into the outer reaches and beyond. Space psychedelic rock this might be, but the band take pains to earth themselves (pun intended) by imbuing their lethargic motorik drones with harder edges - a BRMC riff here, a Viet Cong layer of echoed menace there. Everything seems crafted out of a gravitational pull, a kneejerk hypnosis, but is also heavily calibrated and maintained. The lyrics that halt the inexorable trudge of 'Beta Male' for example give us a lilting esoteric moment of respite before launching back out in the stratosphere, meaning that grooves aren't inherent, that bliss isn't constant, that they are always in control.

They released their debut album The Album Paranoia on Friday (through Tough Love, on white vinyl - impressive package, you can get it here) and will be touring it over the next couple weeks, check em out: