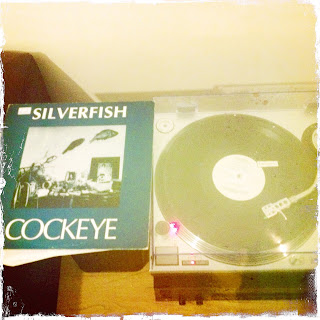 On to the next bargain bin blind purchase (and a pretty poor photo on my behalf). I picked up English outfit Silverfish's debut LP Cockeye (well it's a "mini" album - their first two EPs brought together) from the same charity shop in Streatham as I got Big Dipper's album (I'm not telling you which one, it's proving to be a goldmine!) and chose it solely because it was a Touch & Go release. It's a stamp of a certain kind of quality, and it turned out a fine one. Cockeye opens (the A-Side is called the Snapper Side) with a couple of seconds of muffled 'Jolene' before a screeched "motherfuckers" from Les Rankine kickstarts 'Dolly Parton'. A hardcore track with Dead Kennedys wailing, the song is pinned further into the bowels of hell from guttural rhythms and rusted-saw guitarwork. Bodes well...


The slowed-groove and growl of 'On The Motorway' is both ridiculous and rancid, the bass almost LCD synthetic (you can imagine it being done on a touch pad in parts, which somehow makes this even better), Rankine pretty much just ranting the title over and over. 'Weird Shit' is even sourer - the guitar squall is diseased, the floor drum harsh and tapping the cones of the speakers, the "ah-ha" screams both funny and feral. The down-tuned drawl that develops into a rolling maul bleeds into 'Don't Fuck', and that is when things really kick into my kind of gear. A pummelling, buzzsawing, feedback drone drenched diatribe, this could be explosive White Hills white noise psych if it wasn't for the gangrenous intensity and Rankine's retched vocals. The bent strings madness from Andrew 'Fuzz' Duprey  and the guttural out-of-the-shadows howls that punctuate the track drives everything deliciously off the rails - a stretched-out noise caterwaul that I fucking love.


The Mullet Side blasts forth on 'One Silver Dollar'. The fidelity has improved here, and Rankine's vocals are a little more seasoned - like one of the Deals, but after eating a glass cigarette tray, spilt beer, butts and all. It's a more straightforward punk roll in my opinion, which segues nicely into 'T.F.A.' (Total Fuckin' Asshole), another dirty rock wail that rolls forth with grit and venom, cock rock riffs interspersed with white-noise fret strangling. I was waiting for the weird swamp rock motorik destruction to strike... 'Die' almost got me there. Chris Mowforth's bass is Jesus Lizard dirty; Rankine's basement jibbers, mutters and howls are gurning Mike Patton madness; Duprey lets loose with bent-string mayhem. Then we close out with 'Driller', a dirge that shows no mercy...


I feel like I should know this band - clearly influenced by and influencing many of the bands that now litter my record collection. Silverfish went on to record two more albums - 1991's Fat Axl (produced by Steve Albini) and Organ Fan in 1993, before disintegrating. No wonder, really... Great stuff worth revisiting wholesale. 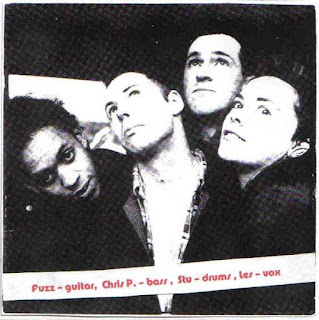