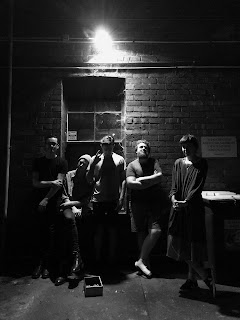 We have a few premieres coming up over the next few weeks, and first cab off the rank is this incredible number from Melbourne dream pop outfit, half/cut. From their forthcoming debut album Ecco Locale, 'Martin Was A Diver' is a silky, sinuous movement, with Jessie's exquisite vocals stretching and overshadowing, a delicate Siren of confidence. The description of the band's sound as "Cocteau Twins meets American Football" is perfectly balanced here. Their sound shimmers, a mixture of the moddish New Wave pop of The The with more earnest, cinematic mores - pretty incredible seeing the band have barely stepped out into the live arena since their inception a couple years ago. The production may help - the album was recorded by Neil Thomason (Augie March, My Disco) and mastered by Harris Newman (Godspeed You! Black Emperor, Arcade Fire) - but half/cut arrive fully-formed. Listen to 'Martin Was A Diver' below, as well as other cuts 'Coming Of Age' and 'Your Shadow Builds A City I Can Never Visit'.