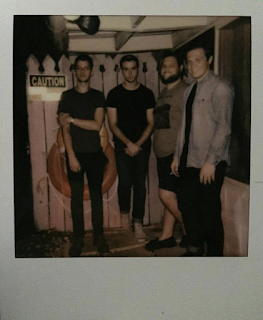 Nothing like a bit of humanitarianism with your post-hardcore. Florida band Frameworks are releasing a new 7” EP, Time Spent, in three different versions – clear with black smoke, white, and translucent gold. The clear/black smoke variation will have a $1 from each donated to the UN Refugee Agency to help with the crisis in Syria. The music itself is as typically asymmetrical as always, offering a melodic thrum before an explosion of razor-edged noise. There is a further industrial element underscoring Framework’s aesthetics though, a sign that Time Spent has been time spent expanding and reframing. ‘Time Spent’ spools out violently with moments of sepulchral calm – Nothing or a Jason Reece-led …And You Will Know Us By The Trail Of Dead comes to mind here. Frameworks are priming an album for later in the year – this is the perfect precursor. You can grab it here.

Email ThisBlogThis!Share to TwitterShare to FacebookShare to Pinterest
Labels: And You Will Know Us From The Trail Of Dead, Donovan Wolfington, Frameworks, Nothing, Topshelf Records