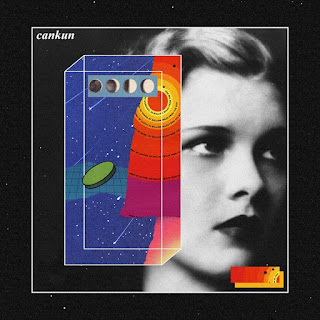 Here is a Friday night fry-out for you. I think this actually came out in 2014 (or at the latest early 2015) but Only The Sun Is Full Of Gold, from Vincent Caylet’s electronic sultan outlet Cankun, is a bursting blast of hypnotic bliss. I picked it up from French label Hands In The Dark a little in the New Year binge (when looking to buy Housewives’ brilliant record Work – a much belated review soon, seeing as it was one of my fave albums of 2015). There is a sonorous drone ever-present in Cankun’s music, which can either send off psych fumes of hedonism and galactic excess (‘System’), or delve into a more intoxicated RnB spiralled drawl (‘Tyreu’). But there is a maudlin side to these woozy sojourns, a wistful stasis of weighed-down chagrin, that punctures some of the more upbeat (albeit laid-out) jams. ‘Moyit’ seems intent to lurk in the murkier shadows of melancholy before breaking out into a disco shudder; ‘Cuts’ uses its first minute for a sepulchral buzz and incongrouous hustled beat before the sunlight breaks the surface. The truest change in direction for me is penultimate ‘Trezz’, an oscillating rumination with gentle piano and languid, ricocheting guitar warbles with looped feedback drowning in the ether – it’s like listening to a yacht rock groove caught in a submarine marooned in a Bermuda Triangle of buzzing disparate parts. An unexpectedly febrile find, you can pick up Only The Sun Is Full Of Gold here – see off the week in a phaser blaze.

Email ThisBlogThis!Share to TwitterShare to FacebookShare to Pinterest
Labels: Cankun, Hands In The Dark Records, Housewives, not not fun records