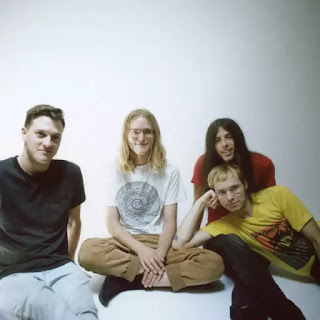 I spoke rather warmly about Gun Outfit’s new LP Dream All Over yesterday. The second album that has been smashed the past month (the others being Pete Astor’s Spilt Milk and the debut album from Chorusgirl) is Thought Rock Fish Scale from Nova Scotians Nap Eyes. The followup to last year’s Whine of the Mystics, this record is even more laidback and rustic than Gun Outfit’s offering, but just as rapt in verbose spurts of wry cynicism and astral derring-do. It is so pared back and relaxed that every track has been recorded live to tape, with no overdubs discernible in the mix.


Take ‘Stargazer’, for example – a relatively simplistic bassline, a cyclical guitar riff, with a light marching drumbeat keeping everything on its track – and the space behind it all as deafening as a wall-of-noise amp-breaker. It shuffles amiably along, even as Nigel Chapman sings lyrics like ‘I venomously crown myself serpent king of my sins’ and ‘I looked myself in the mirror and wondered where could my dream have gone wrong?’ The sometimes-cryptic, sometime-plaintive storytelling is as much a drawcard as the pastoral pluck of the instrumentation, a wonderfully crystalline distillation of juxtaposed thoughts and sounds. There will be a lot of Flying Nun related acts that can be put side by side to Nap Eyes in this regard. There seems to be a lot of self-doubt and concerns about mortality here – but there is no pity and loathing, either.


And I feel that is as much the key as anything else – Thought Rock Fish Scale is a colourful story about one man’s journey through life, spouting half-truth and misdemeanours with the cordial air of someone committed to the cause, albeit one that leads to inevitable impermanence, without a worry or care in the world. It takes til the second last song, ‘Roll It’, before things move above a rustic ramble, with closer ‘Trust’ blowing out the hazed introspection, a deliberate move to get up and walk out in the sunshine.

It too is out through Paradise of Bachelors (two smash hits there fellas) – get it here.