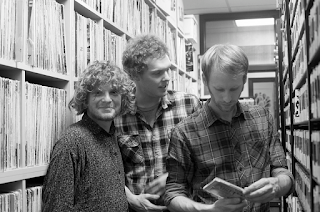 Here's a couple of Chunklet Records releases for a Sunday listen. First up is Scarce Tracks, a four-track 7" from New Zealand's Salad Boys. 'Eighteen Forty Four' is a languid countrifried instrumental jam; 'Devotion' is a woozy buzz; 'Best Kept Secret' a perfectly calibrated slowburner; 'My Uniform' a mixture of the two. It's a 90s centric bliss bomb of a release - these guys are the real deal. You can grab a copy here - there are a couple of these left in blue vinyl too.


Not so lucky if you want to get Giraffe, the new EP from prolific Philly band Honey Radar - it's all out. Four tracks of backwards-looking-forwards 60s influenced psych folk, from the burnished Beatles and veiled Velvets groove of 'Kangaroo Court' to the English pagan hippy rock experiment 'A Trip To Belmoor Cottage', it's a weirdly wonderful meandering trip.