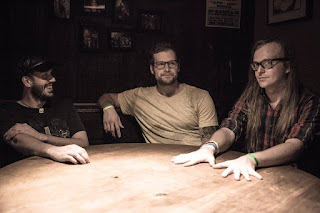 I’ve been bewitched by the beguiling cerebral charm of Kansas-via-New York band Baby Birds Don’t Drink Milk before, especially 2013's Think Tone. The band are back with their fourth album, Burritos. For some reason, with a title like that I expect something much more in the vein of Wavves or Black Lips to pour out of the speakers – but the pastoral Animal Collective-meets-Akron/Family-meets-Fleet Foxes on a spectral bender aesthetics at play here are far more mesmeric. Opening track ‘Kid Margot’ floats in and around you, a percolating miasma of cavernous echo and flow. There is hazed acoustic strums, silken guitar washes, haunting-yet-inviting choral vocals, with lots of aural quirks flitting in the shadows, like insects pinging off the window on a tepid summer evening. This is somehow much lighter and freer than previous BBDDM releases, yet just as arresting in its joyous expanse.

Fire Talk are bringing out Burritos in March – you can pre-order it here.