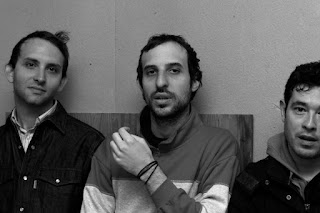 Chicago's Running are one of my favourite bands, that I have never seen, because as far as I know they barely tour out of their hometown, let alone come near where I'm hanging out. Their scorched-earth noise brand of garage punk is abrasive, dark yet hilarious. Their album Vaguely Ethnic was one of my fave albums of 2013, and I've been eagerly awaiting their follow-up, Wake Up Applauding, for at least a year. It was meant to be out this week through Castle Face Records - but no word! Anyone help me here? Anyway, here are two tastes from it. It takes the modern garage rock mould and hurls it into the fire, stomping on its smoldering remains before popping the coals on their slathering tongues with maniacal glee. It's hard to explain exactly how Running are better than most other bands out there - in essence they have much of what makes Thee Oh Sees and their ilk a constant source of energetic enjoyment, and garage bands are legion - they just simply are.