Disintegrating Explosions In The Wilderness 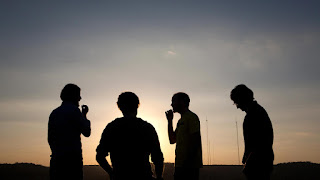 Texas gods Explosions In The Sky are releasing a new album! The Wilderness is the follow-up to 2011’s Take Care, Take Care, Take Care (although they have been involved in soundtracks for the films Lone Survivor, Prince Avalanche and Manglehorn). Having received a ticket to see them play at Royal Albert Hall in April for Christmas, this news is spiking my excitement exponentially. That said, it looks like some EITS preconceptions may have to be left at the door. The first track from it, ‘Disintegration Anxiety’, is a much more tetchy, synthetically-washed beast than anything the four-piece have put together before. Words such as “ambitious” and “aggressive” have been bandied about on press releases, and there is a ominous foreboding that permeates this song. Still, the trademark shimmering orchestration and guitar interplay is, as would be expected, central to the piece. When I listened to it the first time, I enjoyed it but wasn’t transcended the way I usually am when I listen to these guys. I have listened to this song in excess of eighteen times today – and it’s a kneejerk reaction, an impulsive need to hit replay. There is definitely something lurking underneath the surface here that has latched on and won’t let me go – bodes very well for the rest of the album – a hypnotic narcotic to add to the rest of this amazing band’s history. Pre-order The Wilderness here (with limited edition red and maroon etched vinyl - always looking out for you...)